At last, a value-for-money putting aid!

Part of the Easy Putting System by LinksWalker, this innovative tool promises to make you want to practice with a purpose, honing a pro-like putting setup and stroke, and becoming a master of  directional- and distance-control on the greens – – two secrets to shooing lower putting scores

By John Andrisani: Former senior instruction editor at GOLF Magazine, writer of around one-hundred articles on putting in publications worldwide, and author of 40 how-to golf books, including  The Short Game Magic of Tiger Woods and Hogan on the Green.

Andrisani has also collaborated on special projects with putting guru Dave Pelz, when covering the World Putting Championship, and on a book related project with another putting expert, Stan Utley.

In comparing the putting skills and putting scores of the typical amateur player and the typical tour professional, some big differences stand out.

Whereas the pro, who makes a living playing tournament golf, one putts several greens per round, holing eagle, birdie, and par-saving putts, and hitting a total of around 27 putts, the high-handicap amateur who spends his or her leisure time playing  eighteen holes of weekend golf, three putts several times per round, hitting around 41 putts per round.

As to why, on the whole, pro golfers putt more proficiently than amateur golfers, you can bet the game’s best putting instructors, Dave Pelz and Stan Utley, putting virtuoso Ben Crenshaw, and the two best pressure putters of all time, Jack Nicklaus and Tiger Woods, will tell you the typical tour pro practices with a specific purpose. They are absolutely right.

The male or female pro concentrates intently on the practice putting green, as if putting on the course in competition, whereas the high handicap amateur’s attitude is too carefree. Furthermore, whereas the pro works most on directional-control on putts of 20 feet and shorter, and distance-control on longer putts, the average recreational golfer goes round the putting green’s course, casually hitting the ball toward each hole, typically in the 20-50 foot range, yet rarely practicing holing out follow-up second putts from close range. Out the window goes his or her short-putt practice.

Work on your directional-control on short putts by maintaining your normal stroke but increase your tempo so the ball holds its line. Inserting the flag backstop that is also part of the Easy Putting System, around the back of the Sweet Spot disc, will also encourage you to hit the ball slightly harder, so the putted ball better holds its line for the length of the short putt. 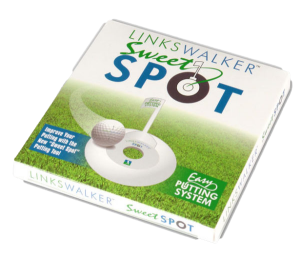 While putting to a small coin, say a dime, on the putting green, can be helpful to some golfers, other players say when doing this on long putts it tends to make one hit the ball too lightly in trying to get it to “die” on the dime. Consequently, one tends to steer the putter, which will turn you into a worse, rather than improved putter.

Practicing long putts, hitting to the Sweet Spot disc, will give you the incentive to employ a fluid back and through putting stroke and hit the ball at a controlled speed, so that it can reach the disc and drop into the small “hole.”

That way, when facing a long, curving putt, or “snake,” on the course, hitting to the 4.25 inch hole will make you think you are putting toward the Grand Canyon, making putting as easy as working out using the Easy Putting System, by LinksWalker.